IN RE FRANCYS JOHNSON

Annotate this Case
Download PDF
Primary Holding
The Courts powers of contempt are a drastic remedy, but Judges are not kings. Summary adjudication of criminal contempt reversed because the appellant was given no opportunity to respond to or defend himself against the trial judge’s determination of contempt.

In Dowdy v. Palmour, 251 Ga. 135 (304SE2d52) (1983), the Supreme Court of Georgia recited that “a trial judge has the power, when necessary to maintain order in the courtroom, to declare conduct committed in his presence and observed by him to be contemptuous, and after affording the contemnor an opportunity to speak in his or her own behalf, to announce punishment summarily and without further notice or hearing.” Id. at 141-142(2) (b)\
Facts
During an evidentiary immunity hearing, Muldrew ordered Johnson be held in contempt of court after he refused to hand over a “notebook” mistakenly provided to defense counsel, rather than prosecutors, by the judge’s assistant.

Johnson said what he discovered inside prevented him from returning the notebook to the judge, as ordered.

The binder allegedly contained email printouts of conversations by Johnson’s client, while in custody, that prosecutors had not submitted into discovery. This allegedly suggested the court had information that the defense didn’t, prompting Johnson to refuse to return the notebook to Muldrew, wanting to instead give the binder to the clerk for security.

After Johnson again refused to hand over the binder, Muldrew ordered the attorney be held in contempt of court and taken into custody without first conducting a contempt hearing.
Attorneys Issues & Holdings

Issue: Whether an appeal of a conviction of contempt of court is moot? No. In re Hughes, 299 Ga. App.66, 67(1) (681SE2d745) (2009) (explaining that “because of the present and possible continuing adverse collateral consequences [the attorney] may suffer as a result of her contempt of court conviction, her appeal of that conviction is not moot”); and see generally Mondy v. Magnolia Advanced Materials, 303 Ga. 764, 772 (2) (b) (815 SE2d 70) (2018) (“A decision by a trial judge to hold someone in contempt of court. . . is not just‘ administrative’; it is a ruling that has substantive consequences for the contemnor, which may include ...incarceration, as well as collateral consequences such as professional discipline.”).
Holding: no

Case Commentary
Nine months after Statesboro litigator Francys Johnson spent hours held by police, the Georgia Court of Appeals has reversed the contempt order issued against him by an Ogeechee Judicial Circuit judge.

"This victory is not just about what happened in this Statesboro courtroom but it's important for the bar," said Francys Johnson, founding partner of Davis Bozeman Law in Stateboro. "Lawyers should not have to fear imprisonment for doing their jobs." 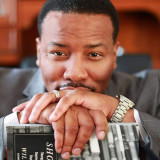 Francys Johnson Personal Injury, Civil Rights, Criminal Law Statesboro, GA
IN RE FRANCYS JOHNSON
Primary Holding
The Courts powers of contempt are a drastic remedy, but Judges are not kings. Summary adjudication...
Facts
During an evidentiary immunity hearing, Muldrew ordered Johnson be held in contempt of court after h...
Attorneys